Getting the Most Out of Poultry Litter Applications

Throughout the Southeast, growers are increasingly incorporating poultry litter into their fertility programs. One reason for this trend is the increasing price of commercial fertilizers, which makes poultry litter an enticing option for growers due to its cheaper cost and nutrient benefit. However, one drawback with organic fertilizer sources such as litter or other manures is that large portions of the analyzed nutrients are bound in plant-unavailable forms. How, then, can growers increase the availability of the nutrients within poultry litter?

Poultry litter is largely used for its nitrogen (N) content. Litter application rates will generally depend on how many pounds of N per acre the grower is trying to reach. On a pounds per ton basis, litter will contain 60 pounds of N, 60 pounds of phosphorous (P) and 40 pounds of potassium (K), for a nutrient analysis of 60-60-40. However, of the three primary nutrients, N availability can be the most difficult to predict. This is because inorganic, plant-available forms of N (ammonium [NH4-N] and nitrate [NO3-N]) make up just a small portion of the total N in the litter. The remaining N is in an organic form, and must be mineralized before becoming available to the plant.

Since most applications of litter are spread to meet the N needs of the crop, P and K from the litter can build to levels that are greater than the crop needs, particularly if litter is applied to the same fields year after year. This is of concern as growers might then be restricted in the amounts of litter they can apply in the future.

Conversion of N, P and K into plant available forms takes place within the soil. Microbes and soil chemistry play an important role in this process, helping mineralize both applied and existing nutrients for plant uptake.

Using biochemical technology in poultry litter applications can help increase this conversion process, unlock nutrients within the litter and facilitate uptake into the plant. Take a look at the following study conducted by the University of Arkansas. In the study, Accomplish LM, a biochemical fertilizer catalyst, was broadcast at 2-quarts/acre to a corn field; poultry litter was applied at a rate to achieve 160 units of N per acre. Both fresh and pelletized forms of litter were used. 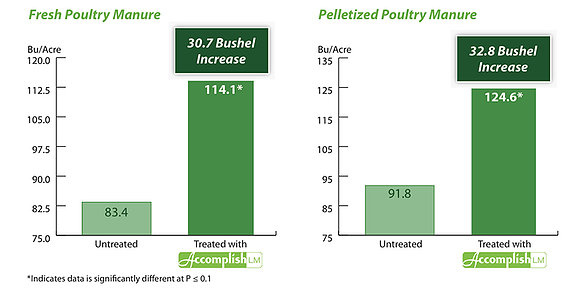 Note: All treatments received the same amount of N (160 units)

Both applications where Accomplish LM was applied had over a 30 bushel yield increase! The power of the biochemical technology found in Accomplish LM was able to convert more of the applied nutrients in the litter into plant-available forms, leading to greater yields.