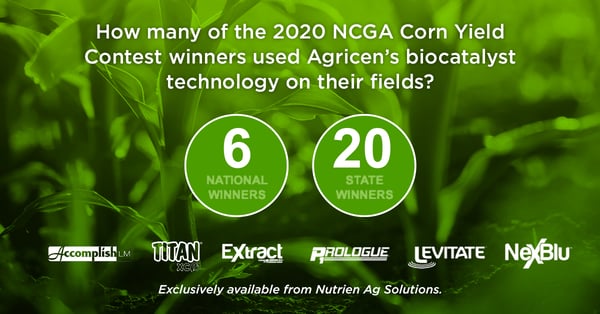 Grower Don Stall came in first place, nationally, in the Conventional Irrigated category with a yield of 476.9052 bu/acre, which was also the overall highest yield in the 2020 contest.

"Titan and Accomplish...turn nutrients into an available, soluble form so we can take them up," says Don. "It obviously works. You can see it, when you run the combine across the field and you weigh it. The results speak for themselves."

The Corn Belt's first place national winner in the Conventional Non-Irrigated Category was Kevin Kalb, with a yield of 385.4405 bu/acre.

"When I talk about raising, potentially, the biggest crop we have, I need to get as much phosphorus as I can into the plant. Titan makes that possible," Kevin says.

If you are interested in more details about these and other growers who have had winning corn yields in the NCGA contest, you can read about them in these posts:

Wishing everyone great success in the coming season!

You can learn more about the biocatalyst technology that is helping top corn growers achieve big yields by watching our film, Last Stand, or downloading our FAQ.