This season, with high corn yields and a late harvest in many places, it will be critical to take steps to maximize residue decomposition and nutrient release for the benefit of next seasons’ crops. It’s important to keep in mind that the primary limiting factor for residue decomposition is cooler temperatures, which reduce the microbial activity required for residue breakdown. Given the late harvest, that means there's only been a short window for natural decomposition processes to take place. In addition, larger yields produce more residue, which requires more time and energy to properly break down.

We’ve previously discussed just how inefficient applied NPK fertilizers can be in the first year after application, a problem that is compounded in high-residue fields.

Corn residue from a 200 bushel crop contains approximately 116 units of nitrogen (N), 27 units of phosphorous (P) and 209 units of potassium (K). Nutrients in the residue are not in a plant-available form, and mineralization must occur prior to plant utilization. Meanwhile, as soil microbes digest crop residues, they can tie up applied N, making it unavailable for plant growth in the spring. In corn, the lack of N causes corn seedlings (emergence to V3-V4) to turn yellow, also known as “ugly corn syndrome.”

To increase the efficiency of their applied fertilizer in high-residue conditions, many growers are now using Accomplish LM (a biochemical fertilizer catalyst that is not dependent on soil microbial activity) in their nutrient release programs—and are seeing higher yields as a result. Applied in the fall (preferably) or even along with a grower’s standard spring N application, Accomplish LM hastens residue decomposition and mineralization of applied nutrients. This practice is supported by data that includes the findings from a large corn trial conducted in five Northeast Iowa locations in 2010 and 2011.

The trial examined the effects of using additional spring-applied N or Accomplish LM (which does not contain N) to address ugly corn syndrome. Four different N sources were used*, and were applied at 40 units of N per acre in late March, 30 days prior to planting. The Accomplish LM treatment was applied at 3 pints per acre with water and no additional N. These applications were in addition to the grower’s standard N application (200 units of N as anhydrous ammonia [NH3]) that had been applied in the fall.

Those two data points, coupled with the Accomplish LM treatment having the highest yield, tell a compelling story that the application of Accomplish LM on the residue created more available N (higher soil nitrate) than applying 40 additional units of N–resulting in improved mineralization of nutrients–and that it delivered that N to the grain (lower stalk nitrate and higher yield). 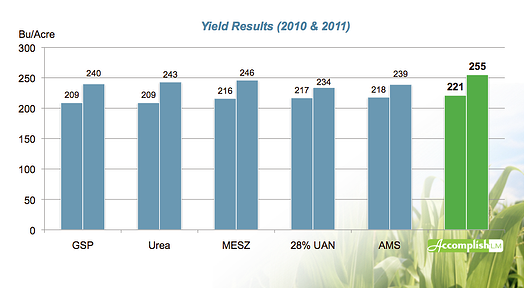 Just 60 days after application, all of the Accomplish LM treated blocks showed increased soil phosphorous levels. On average, P1 levels increased by 18% and P2 levels by 31% compared to the check. It requires 8-10 pounds of P2O5 to raise a P1 soil analysis 1 ppm; a 13 ppm increase, which was achieved with the Accomplish LM treatment, is equal to applying 100 - 130 lbs of P2O5.

To summarize, Accomplish LM can be used to help mineralize and release nutrients in high residue fields. Over all five Iowa locations, adding just three pints of this biochemical additive 30 days prior to spring planting increased the efficiencies of soil N and soil P, resulting in the highest overall corn yields both years.