Yellow seedlings are a familiar sight for many corn growers. On continuous corn acres, the carbon-to-nitrogen ratio can be more than double the optimal ratio* for crop residue decomposition due to the buildup of organic matter from multiple years of corn-on-corn rotations. Even if a grower has applied nitrogen during the previous fall or around spring planting, soil microbes can out-compete seedling corn plants for nitrogen when excess carbon is present. The microbes use the nitrogen as a food source, immobilizing it as they work to degrade crop residues; the seedling corn plants, meanwhile, turn yellow due to a lack of available nitrogen.

One effective way to solve the problem of yellow corn seedlings in corn-on-corn rotations is to lower soil C:N ratios by baling corn stalks for winter cow feed. Unfortunately, this is really only practical if one has cows—and most row crop farmers do not. In addition, complete removal of corn residue also takes away a significant amount of the N, P and K that comprises corn stover (Table 1).

A second option for making sure seedling corn has enough nitrogen is obvious enough: apply more nitrogen to meet the needs of both the soil microbe system and the seedling corn. A common approach in the Corn Belt is to broadcast 10-15 gallons of UAN 28% on corn residue after harvest, with the idea that the extra nitrogen will facilitate rapid decomposition of the corn residue.

But more nitrogen isn’t necessarily the best or only solution for row crop growers. Accomplish LM, a biochemical crop input that contains no nitrogen, is another option that more and more growers are using to solve residue issues. Numerous field trials show that Accomplish LM can accelerate the breakdown of crop residues, even on no-till acres. The concentrated biochemistry in the product also effectively releases nutrients tied up in the stover—with resulting yield increases at harvest time.

Figure 1. Increased yield with fall-applied Accomplish LM in a split field trial on corn. Accomplish LM (2 quarts/acre) was applied in the fall with 28% UAN (3 gallons/acre) plus water, and compared to a fall residue application of 28% UAN alone (16 gallons/acre). The Accomplish LM treatment out-yielded 16 gallons of 28% UAN by 9.3 bushels per acre. (Note: All results were obtained despite an historic drought.)

The above field trial from Dana, Indiana (Figure 1) is a perfect example. In a split field trial on corn, a fall residue application of 16 gallons/acre 28% UAN was compared to a fall application of Accomplish LM applied at 2 quarts/acre + 3 gallons 28% UAN + 8 gallons of water. The Accomplish LM treatment out-yielded 16 gallons of 28% UAN by 9.3 bushels per acre. (One caveat to remember: If the UAN is part of the grower’s nutritional program, do not cut or lower the applied N. For this trial, the 16 gallons of UAN was applied for stalk breakdown, not plant nutrition.)

Another excellent example is a corn on soybean trial conducted in Hillview, Illinois. In this trial, a fall residue application of 2 gallons/acre 28% UAN made on soybean stubble was compared to Accomplish LM applied at 2 quarts/acre + 2 gallons 28% UAN + 8 gallons of water. The Accomplish LM treatment provided a 23 bushel/acre advantage over 28% UAN alone (Figure 2). 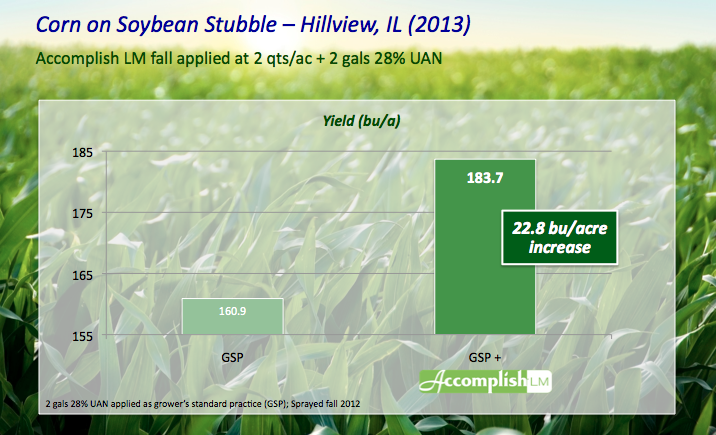 Figure 3. Breckenridge, MI (2013). In fall 2012, 2 quarts of Accomplish LM + 2 gallons of 28% UAN + water was applied to standing corn stalks. This picture, taken March 2013, shows the difference between treated and untreated parts of the field in a colder growing area (a latitude north of Madison, WI).

For any grower, it can be a challenge to optimize nutrient release from crop residue—and to get those nutrients mineralized in time for the growing season. But “more nitrogen” isn’t really the answer. Making Accomplish LM part of your program is a cost-effective way to unlock the nutrients tied up in your stover, and keeps your seedling corn green.