Fertility Programs Help Soybean Growers Get More Out of Their Acres

Soybean plants do not really start fixing nitrogen until V3—which means that they go nearly a month without producing any N. In addition, they stop producing N around R1/R2, but they need this nutrient to fill out the beans in each pod. A fertility approach that makes N and other nutrients more available in the reproductive stages can enhance early soybean root and plant development. It can also increase pod counts and seed fill for a higher yield at harvest.

Soybeans are classified as a legume crop. Legumes have nodules on the roots that fix atmospheric N (78% of the atmosphere) and convert it into a form the plant can use. The common misconception about these crops is that they do not need additional N for growth and development. In reality, soybean crops are only able to produce about half of the actual N needed by the plant. Additional N must be supplied through fertility programs or other technologies to release unavailable forms of N from the soil.

Often, these benefits also translate into an overall healthier plant throughout the growing season and a yield bump at the end of the season. Figures 1-4, which are taken from recent trials of Accomplish LM and Titan PBA, demonstrate some of these benefits.

Figures 1-2 are from a soybean fertility trial conducted at Rocking Z Acres in Wessington, South Dakota, showing improvements in root development and yield when Titan PBA is impregnated on MAP applied 2x2 at 75 lbs per acre.

Figure 1. Soybean Trial - Wessington, South Dakota (2013). Improved yield with Titan PBA in a soybean dry starter program. Titan PBA was applied at 1 gallon per ton on MAP 11-52-0, which was applied 2x2 at 75 lbs per acre. 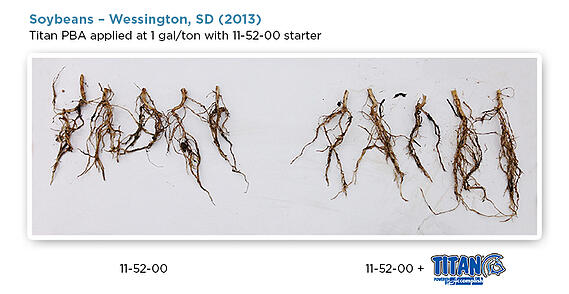 Figures 3-4 show the results of soybean trials conducted in Maryland in the summer of 2013. After wheat was harvested in July, Accomplish LM was broadcast with UAN prior to soybean planting over wheat stubble. The increased ability of the Accomplish LM treatment to release nutrients out of the wheat residue was associated with better root development and healthier plants. 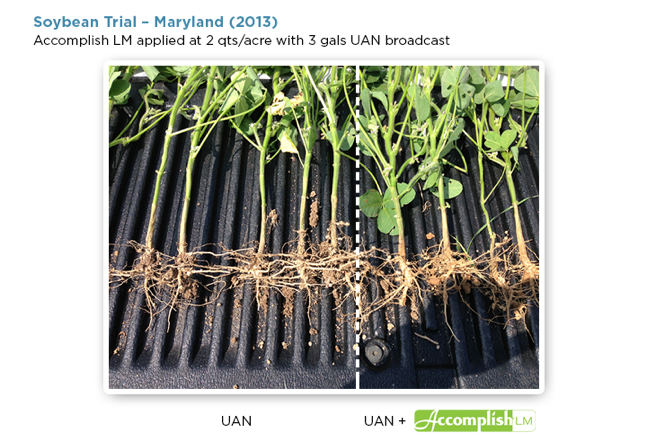 Figure 3. Soybean Trial – Maryland (2013). Enhanced root development in soybeans with Accomplish LM. Accomplish LM was applied at 2 quarts/acre with 3 gallons of UAN broadcast on wheat stubble prior to soybean planting in July. 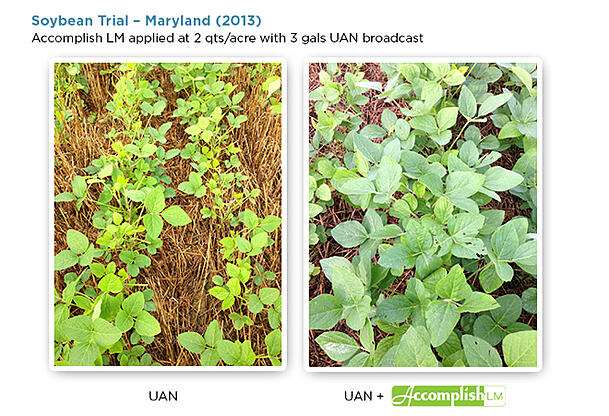 Figure 4. Soybean Trial – Maryland (2013). Greener, healthier plants with Accomplish LM. Accomplish LM was applied at 2 quarts/acre with 3 gallons of UAN broadcast on wheat stubble prior to soybean planting in July.

If you are growing soybeans this year, consider using a fertility program with Accomplish LM or Titan PBA to get more out of your acres.